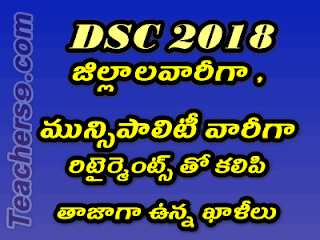 The ULB-wise and District-wise DR Vacancies along with its Roster points in the website of the District Educational Officer's office concerned immediately. Further, they have advised showing SGT backlog vacancies in current vacancies, since earlier DSC was held during 2014 and after completion of two-panel years, all backlog vacancies will be converted as current vacancies and moreover, as per service rules, fresh roasters are maintaining in Municipal Management. In this regard, it has also been informed to CSE that, the Government (MA&UD Dept.) is going effect Transfers under Municipal Management as per G.0.Ms.No.506 MA, dt.16.05.2018, due to which DR Vacancy Rosters will be changed. They have requested that, to appraise this issue at a higher level and take immediate action and upload the vacancies for DSC2018
without further loss of time.
Accordingly, as per the instructions, the ULB-wise and District-wise DR Vacancies along with its Roster points have been worked out duly taking the 212 no. of Transfers proposals into consideration under Spouse and Request Categories besides 100 Mutual transfers which will not alter the Roster points as per G.0.506 and the DSC-2018 recruitment vacancies are furnished in Annexure-I, II ,III& IV.


Vacancies for DSC 2018 in Municipal schools in AP