G.O.MS.No.43 Procedure for filling up of the posts in Aided Institutions

G.O.MS.No.43 Procedure for filling up of the posts in Aided Institutions 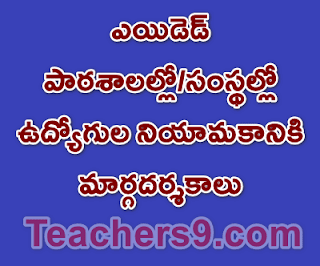 In exercise of the powers conferred under section 99 of the Andhra Pradesh Education Act, 1982 (Act.No.1 of 1982), the Government of Andhra Pradesh hereby make the following amendment to the Andhra Pradesh Educational Institutions (Establishment, Recognition, Administration and Control of Schools under Private Management) Rules, 1993 issued in G.O.Ms.No.1, Education (PS.2) Department, dated 01.01.1994 as subsequently amended. In the said rules, for rule 12, the following shall be substituted, namely:- 12. Procedure for filling up of the posts in Aided Institutions.
1) The merit-cum-roster based recruitment system as is existing be continued. There shall be a separate roster system for each school. The posts shall be filled up accordingly. However, this shall not apply to a minority educational institution only if they are selecting a candidate belonging to the concerned minority community. Where such a candidate is fitted against a vacancy belonging to S.C./S.T., then the S.C./S.T vacancy shall be carried forwarded to the next recruitment.
2) The rationalization exercise shall be taken up every year in the month of October based on the Aadhaar seeded UDISE enrolment data as on 30th September of that year. The recruitment procedure to fill up vacancies shall be taken up only after completing the promotions, which shall be done on a regular basis every year.
3) The District Educational Officer or the Regional Joint Director, as the case may be, shall estimate the number of posts to be filled in respective unit /School by way of direct recruitment based on teacher-pupil ratio requirement subject wise only after affecting promotions.
4) Regional Joint Director of School Education/District Educational Officer has to confirm that there are no surplus teachers/posts in the district and submit the school-wise posts, required to be filled up in respective unit/ school, by way of direct recruitment to the Commissioner of School Education.
Procedure for filling up of the posts in Aided Institutions