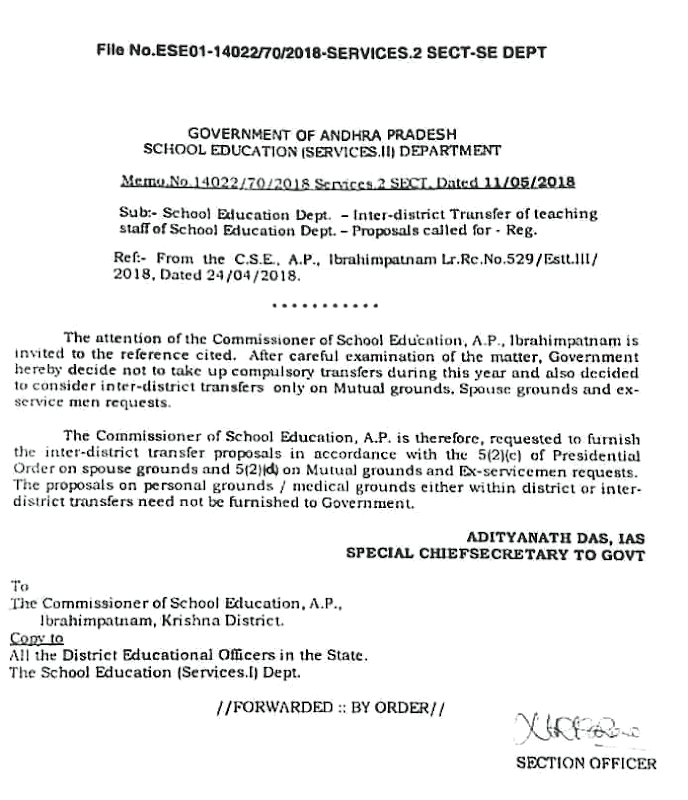 Sub: School Education Dept. - Inter-district Transfer of teaching staff of School Education Dept. - Proposals called for - Reg.
Ref:- From the C.S.E., A.P., Ibrahimpatnam Lr.Rc.No.529/Estt.III/ 2018, Dated 24/04/2018.
The attention of the Commissioner of School Education, A.P., Ibrahimpatnam is invited to the reference cited. After careful examination of the matter, Government hereby decide not to take up compulsory transfers during this year and also decided to consider inter-district transfers only on Mutual grounds, Spouse grounds and ex-servicemen requests.
The Commissioner of School Education, A.P. is, therefore, requested to furnish the inter-district transfer proposals in accordance with the 5(2)(c) of Presidential Order on spouse grounds and 5(2)(d) on Mutual grounds and Ex-servicemen requests. The proposals on personal grounds / medical grounds either within the district or inter district transfers need not be furnished to Government,