R.C No 1 - NATIONAL AWARDS TO TEACHERS-2017- ELIGIBILITY OF TEACHERS-PROCEDURE FOR SELECTION-SCHEDULE FOR SUBMISSION OF NOMINATIONS,APPLICATION FORM

The Scheme of National Award to Teachers was started in the year 1958-59 with the object of raising the prestige of teachers and giving public recognition to the meritorious services of outstanding teachers working in Primary, Middle and Higher Secondary Schools.  In 1967-68 the scope of the scheme was enlarged to cover the teachers of Sanskrit Pathshalas, Tolls etc. run on traditional lines.  In 1976 the scheme was further enlarged to cover Arabic/Persian teachers of Madrasas.
From the award year 1993, the scheme has further been enlarged to cover teachers from Sainik Schools, Navodaya Vidyalayas and schools run by Atomic Energy Education Society.  Earlier CBSE had been allocated a quota of 10 awards – 2 for each zone subject to availability in case of shortfall of recommendation from the entitled States/UTs and organizations.  Each award carries with it a certificate of merit, a cash award money of Rs.50,000/- and a Silver Medal.  The enhanced amount will be given to the National Awardee from the Award year, 2014. 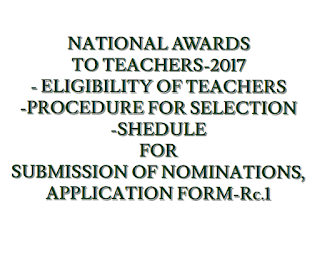 (III)  20Awards Teachers of Central Board of Secondary Education (CBSE) affiliated schools.  The National Awards belonging to CBSE would comprise of awards to 2 teachers each for Northern, Southern, Eastern, Western and North-Eastern, Delhi Zones and 2 Slots for the teachers of independent affiliated schools situated abroad.  The teachers           recommended by CBSE should be other than those who have already been covered under the allocated quota for States/UTs/ Organizations.

- Teachers with disabilities working in regular schools.
- Special teachers or trained general teachers who may have done outstanding work for Inclusive Education.


CONDITIONS OF ELIGIBILITY OF TEACHERS FOR  CONSIDERATION FOR THE AWARDS:

MAIN CONSIDERATIONS THAT SHOULD GUIDE THE SELECTION OF TEACHERS AT VARIOUS LEVELS:


PROCEDURE FOR SELECTION OF NATIONAL AWARDS FOR TEACHERS:


The initial selection shall be made at the District level by a District Committee from amongst the names recommended by the District Education Officer, a District Inspector of schools or such other local authorities e.g. Corporation, Panchayat etc. which the State Government may determine in the context of local conditions. No teacher shall be asked or permitted to apply for the award.  The names shall be recommended by the District Education Officer etc. on the basis of the Teachers’ record of work.
The State Selection Committee shall scrutinize and sift the recommendations of the District Committee and recommend to the State Government two names for each award allotted to the State and one or two names of Sanskrit/Arabic teachers if found suitable.  The names of teachers selected by the State Committee shall be arranged in order of merit before they are recommended to the State Government who shall forward the same to the Union Government alongwith character certificate of faultless antecedents and absolute integrity duly signed by the Education Secretary.  The recommendations of the State Selection Committee shall not be modified by the State Government to substitute names, or to disturb the order of merit recommended by the State Selection committee.  However, if the State Government is of the view that any of the selected teacher is otherwise unfit for the award, it may recommend omission of such names to the Union Government furnishing details for the same.
The State/UTs/School systems shall recommend at least the prescribed number of awards under the category “Special Awards”.  In case they do not find suitable number of teachers under this category, the award will not be recommended, but in that situation the number of allocated awards for special award shall not be transferred to the general category.
The final selection will be made by the Union Government.