ProBrain Suite is an advanced brain training application that aims to increase IQ, brain activity and performance. This useful paid app focus on arithmetic, memory and problem solving functions of the brain. 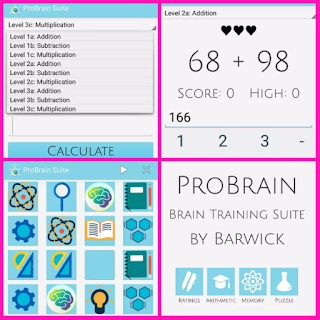 THE HON’BLE SRI JUSTICE SANJAY KUMAR
AND
THE HON’BLE SRI JUSTICE N.BALAYOGI
WRIT PETITION NOs.18683 OF 2009, 17340 OF 2013
AND 25683 OF 2015
C O M M O N O R D E R
(Per Sri Justice Sanjay Kumar)
These three writ petitions are amenable to disposal by way of
this common order.
Grievance for the petitioners to approach this Court was the
action of the authorities in reserving 30% of the posts in the cadre
of Secondary Grade Teachers for candidates with D.Ed.
qualification, by adding a proviso to Rule 7 of the Rules
promulgated under G.O.Ms.No.161, Education (Ser-VI)
Department, dated 06.12.2008.
The case of the petitioners was that this modification was
made to the Rules after commencement of the DSC-2008 selection
process pursuant to the notification dated 06.12.2008. Challenge
was accordingly made to the aforestated amendment to the Rules
and a consequential direction was sought to the respondent
authorities to complete the selection process of DSC-2008 in
accordance with the notification dated 06.12.2008. Challenge was
also made by the petitioners to the judgment dated 31.08.2009
passed by the Andhra Pradesh Administrative Tribunal,
Hyderabad, in O.A.Nos.9172, 9173, 9766 and 9744 of 2009,
whereby the Tribunal denied them relief and dismissed their O.As.
By order dated 09.09.2009 passed in W.P.No.18683 of 2009,
this Court suspended the operation of the proviso added to Rule 7
of the Andhra Pradesh Direct Recruitment for the posts of Teachers
(Scheme of Selection) Rules, 2008 promulgated under

G.O.Ms.No.161, Education (Ser.VI) Department, dated 06.12.2008
through the amendment made vide G.O.Ms.No.28, Education
(Ser.VI) Department, dated 29.01.2009, pending disposal of the
case. This Court also made it clear that the selections and
appointments made, without reference to the aforestated proviso,
would be subject to further orders in the writ petition. This
interim order was challenged by some of the affected candidates
before the Supreme Court in Special Leave to Appeal (Civil)
No.24396 of 2009 and batch. By order dated 04.10.2010, the
Supreme Court confirmed the interim order passed by this Court
but requested this Court to dispose of the case within a time
frame.
While matters stood thus, the National Council for Teacher
Education (NCTE) issued a notification, published in the Gazette of
India dated 23.08.2010, under the Right of Children to Free and
Compulsory Education Act, 2009, wherein it was stated that a
candidate with B.A./B.Sc. with at least 50% marks and B.Ed.
qualification shall also be eligible for appointment as a Teacher for
Classes I to V up to 01.01.2012, provided he undergoes, after
appointment, an NCTE recognized 6-month special programme in
Elementary Education.
Sri S.Ramachandra Rao, learned senior counsel, relies upon
the judgment of the Supreme Court in CHAIRMAN AND
MANAGING DIRECTOR SINGARENI COLLIERIES COMPANY
LIMITED V/s. M. RAMESH CHANDER1, wherein it was observed
that reserving a quota for internal candidates for direct
recruitment may not be constitutionally valid. He would further
1 Civil Appeal NOs.7665-66 of 1994 decided on 22.11.1994
3
state that taking into account the amendment made to the statute
vide the National Council for Teacher Education (Amendment) Act,
2011, enacted by the Parliament, the Supreme Court closed Civil
Appeal Nos.7479 of 2009 and batch which had been referred to a
Larger Bench for consideration of the issue involving D.Ed. and
B.Ed. qualifications, in the context of recruitment to the cadre of
Secondary Grade Teachers.
In the light of the aforestated facts, we are of the opinion
that the issue raised in these writ petitions is now rendered purely
academic. Learned Special Government Pleader appearing for the
State fairly concedes that owing to the interim order granted by
this Court, the reservation sought to be made in favour of
candidates with D.Ed. qualification was not implemented and all
the posts which were covered by this category of reservation were
filled up without reference to the same.
This being the situation, the writ petitions are closed.
In the light of the closure of these writ petitions, the
appointments made, which were subjected to further orders in
these writ petitions, shall stand regularized in all respects.
Pending Miscellaneous Petitions, if any, shall stand closed
in the light of this final order. No order as to costs.
____________________
SANJAY KUMAR, J.
___________________
N.BALAYOGI, J
8th FEBRUARY, 2017.
Note:
Furnish C.C. in one week.
(B/o) PGS