More
Home » all » vzm » Rc.No.558-Tenure of SMC's completion and Alternative arrangements for release of funds

Rc.No.558-Tenure of SMC's completion and Alternative arrangements for release of funds 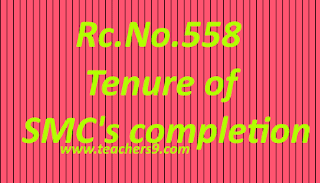 A.P S.S.A vizianagaram project officer has released Rc.No.558.As per Rc.No.558  SMC's of all schools should be tenured on 29.06.2015.So All M.E.O's will take necessary alternative arrangements for release of funds.
Ref:-
Lr.Rc.No.746/SSA/C8/2015, dt. 22. 6. 2015 of the State Project Director, Sarva Siksha Abhiyan, Andhra Pradesh, Hyderabad.
Note orders of the Collector & Chairman, Sarva Siksha Abhiyan,Vizianagaram

In pursuance of the instruciions issued in the reference 1st cited and orders issued in the reference 2nd cited, all the Mandal Educational Officers in the district are informed that
In view of the above position, the Mandal Educational Officer of the concerned mandal is hereby kept In-charge as Chairperson of the School Management Committees in the mandal with School Headmaster & School Complex Headmaster as joint signatories for release of payments till formation of new SMC's.
Copy of RC.No.558 dated 30.06.2015 vizianagaram